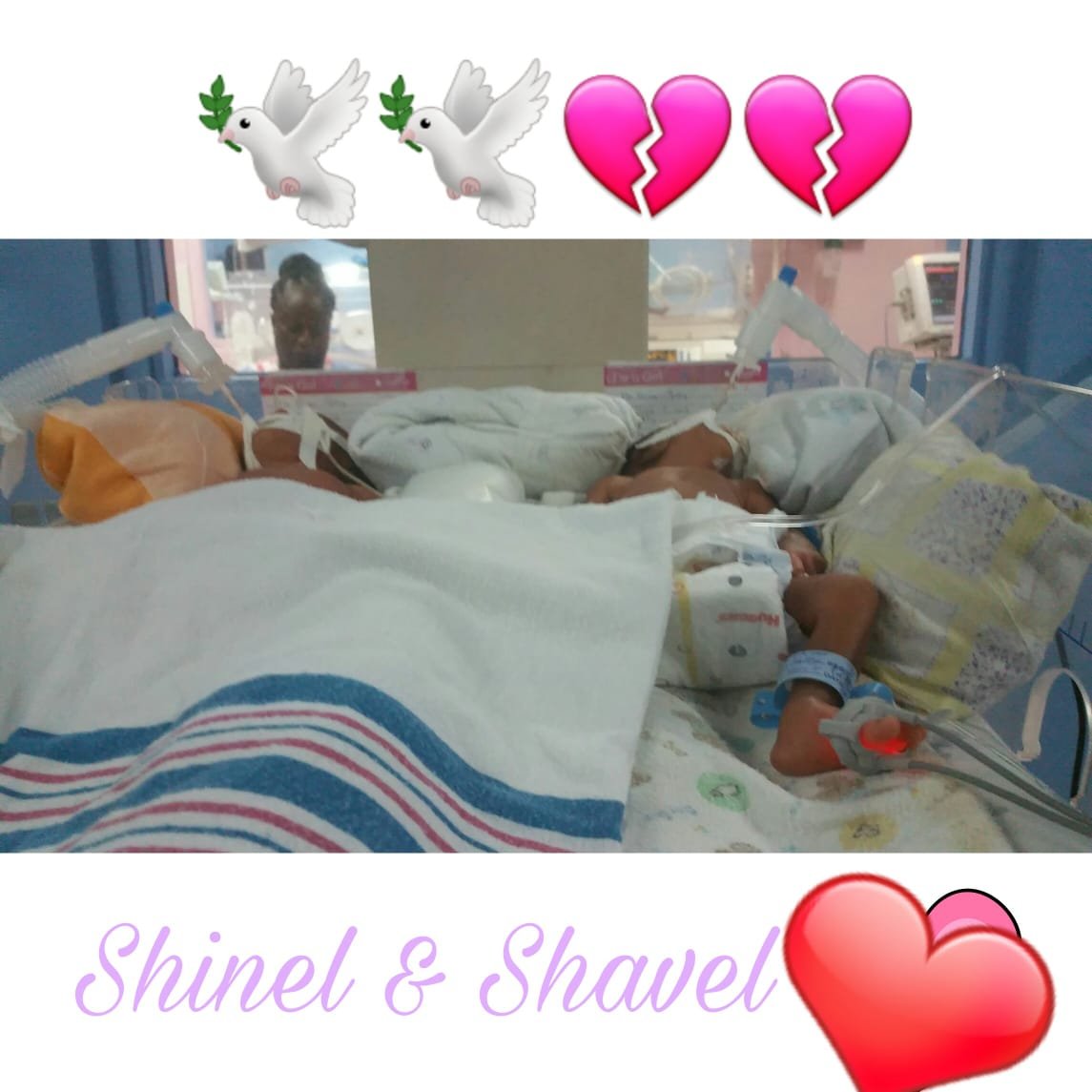 In early December, 2017, I found out I was pregnant about 1 month into the pregnancy. My pregnancy was full of complications (mostly pain) and it made the pregnancy a battle for me and my partner.

On December 24, I was getting ready for work when I felt something warm running down my legs and when I looked, I saw blood… I rushed to the hospital and spent about 4 hours there before being told I was having implantation bleeding. I was happy to calm my fears of a miscarriage and I received iron and folic acid tablets from the hospital, to ensure I was getting the necessary nutrients for me and my baby. I did an ultrasound on December 26, 2017, which revealed that I was having twins! My family was very ecstatic and we were looking forward to them.

But the bleeding continued… until around January 28, 2018. I was told I wasn’t to worry as the babies were fine. During my pregnancy, I had terrible morning sickness and when my belly started to stretch, it was very painful at nights when the babies were kicking up a storm. Apart from that, the pregnancy was a healthy one. Or so I thought….

I was admitted to the hospital on May 26, 2018 because I was having contractions (28 weeks in pregnancy), then I started to bleed on the 31st and no doctors or nurses could tell me the reason why I was bleeding. I remember asking them numerous times and all they would say was: “You have two active girls and their heart rates are awesome.”

By the time I started to lose more blood, they had me transferred to a hospital in Kingston at 29 weeks and I was monitored at the hospital. At 30 weeks, on June 9, 2018, I delivered my two girls, Shavel at 5:20 p.m and Shinel at 5:21 p.m via emergency C-section. I was told that I had placental abruption with heavy bleeding and this is what caused me to go into labour early. Having premature babies, so many things can go wrong. We didn’t know what to do, what to expect. All we had to do was be hopeful and pray.

Because my girls were born premature, their organs were not fully developed as yet. They started losing blood and their lungs weren’t developed. On June 13 at 3:30 a.m, Shavel died when the tube that was supposed to help her breathe was blocked by blood. I only saw her alive once. She was a bigger of the two girls and I really thought she was going to make it. I was so distraught. This was really happening. I was in disbelief.

But I had to be strong for Shinel. She needed her mom too. I was incredibly hurt, but thankful that she was still alive.

On June 15 at 8:30 a.m, Shinel passed away… they took her off the oxygen for about 30 minutes to check if she could manage to breathe on her own. I was numb. This is too much for any person to bear. She was the smallest, yet the strongest and I remember standing and watching doctors resuscitate her over and over again. How did this happen? It was as if I was in a nightmare…

My children’s father is so much stronger than I am and my mood has been stuck on sad.

Everyone says I still cry and I should stop. Funny enough, they haven’t been in our situation and think they know how it feels. I had to resign from my previous job because everyone kept asking me about the babies even if they heard about what happened.

I keep putting on my best face to look like I’m okay because I am so conditioned into being that strong person that deals with things on my own.

But I can’t anymore. I am breaking. I have decided to break my silence and it has been helping me heal. I hope by sharing my story, it helps someone too.